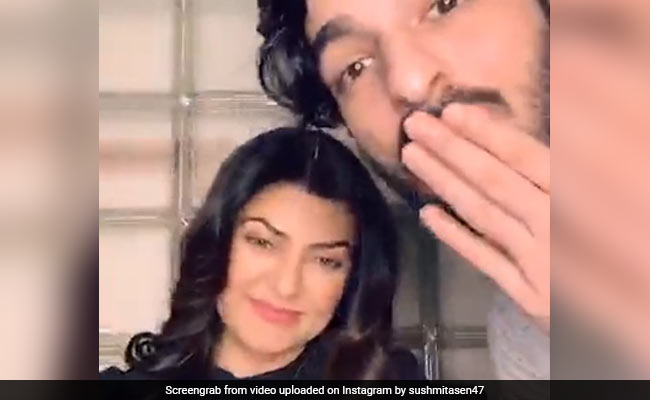 Actress Sushmita Sen, who just made her comeback with the Disney+Hotstar web-series Aarya, had a delightful surprise in store for her fans recently. The former beauty queen started a live session on her Instagram without prior announcement to connect with her fans and as a big surprise, included some of her fans in her live session! How sweet is that? The 44-year-old actress connected with fans not only from different parts of India but also from countries across the world – the first fan she connected with was from Nigeria and Sushmita was besides herself with joy with the amount of love showered on her. During the live session, Sushmita also connected with a batchmate. Sushmita’s live session also had a cameo by her boyfriend Rohman Shawl, who popped into the frame for a while and was heard commenting throughout. Sushmita’s daughters Alisah and Renee also made adorable appearances in the video.

As requested by several of her fans, Sushmita saved the entire Instagram live session and shared it as a post. The Aarya actress dedicated this thank-you message to her fans: “As always you guys fill my heart with blessings! Your faces, those smiles and the genuine love. Another round of making friends… cherished! Love you guys! Saved it as promised. Until next time.”

Sushmita Sen, who has been busy interacting with her fans on social media, trended a great deal for her response to a query about nepotism recently. When asked: “How did you survive nepotism in Bollywood?” she said this:

By focusing on my Audience…YOU GUYS!!! I will continue to work as an actor as long as YOU want to see me!! #simpleenough#AskAaryahttps://t.co/or0a3Myz8c

Sushmita Sen, who returned to acting after a hiatus of a few years, told news agency PTI in a recent interview that: “For me, this culmination of everything coming together has been because I gave it time, I gave my everything to wait. I said I will sit at home but when I do something it has to be worth it. And I can proudly say it now.”