Climax, featuring adult film actress Mia Malkova, recently made its tremendous entry on OTT screens. The Ram Gopal Varma directorial was released on RGV World, skipping the theatrical release due to the current pandemic outbreak and the subsequent lockdown. The recently launched streaming platform has been named after the controversial filmmaker.

Climax has been grabbing the attention of the netizens since its inception, which has proved to be a total gainer for the film. With receiving mixed reviews so far from the audiences, the movie has garnered around 1,68,596 views from RGV World on a single day. The director of the movie took to his social media handle to report the same. “In less than a day, 1,68,596 people saw #Climax by paying Rs 100 per view making it a Game Changer.. Many find a novelty in the strange film, which is a good Corona break,” he wrote on Twitter.

In less than a day 1,68,596 people saw #Climax by paying Rs 100 per view making it a GAME CHANGER ..Many find a novelty in the strange film which is a good Corona break,
For Bookings: https://t.co/FD65qcsZgc

Well, a few netizens commented that the movie is a money scam and a trap with a filthy content, others complained about the technical glitches they faced while watching the movie. There were also comments appreciating the movie, calling RGV a trendsetter.

On a related note, the director, known for his tongue in cheek comments recently announced that the movie will be streamed with a pay-per-view model, for which a viewer will have to pay Rs 100 per view. Bankrolled by ShreyaET, the horror-action film is set against the backdrop of a desert. Climax marks the second collaboration of the director and actress after the 2018 film God, Sex, and Truth. The recent promotional interaction of the duo was highly loved by the netizens, wherein the actress revealed how she entered the adult film industry, despite living a normal life like everybody else. 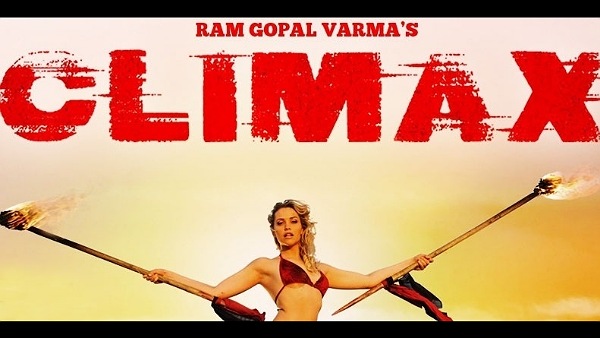 Climax Twitter Review: Here’s What The Viewers Have To Say About The RGV Movie

Also Read: RGV Expresses His Desire To Turn Gay, And The Credit Goes To Jr NTR! Find Out Why