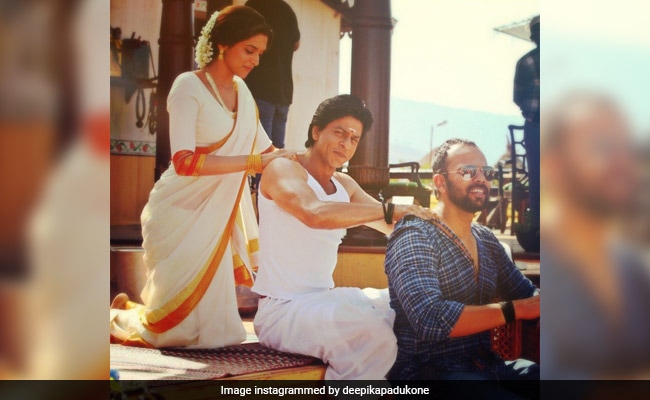 Deepika Padukone is celebrating seven years of her film Chennai Express, by sharing BTS pictures along with her co-star Shah Rukh Khan and the film’s director Rohit Shetty. On Sunday, Deepika shared a chunk of memories in the form of throwbacks on her Instagram profile and she captioned the post: “Unforgettable! 7 years of Chennai Express” adding a heart emoticon. On her Instagram stories, the actress also posted multiple artworks of her character Meenamma that were made by her fans. Besides Chennai Express, Deepika Padukone and Shah Rukh Khan have co-starred in films like Om Shanti Om ( which marked Deepika’s Bollywood debut) and Happy New Year – both the films were directed by Farah Khan.

Meanwhile, actor Nikitin Dheer, who starred as the antagonist Tangaballi, shared throwbacks from the film on Instagram and he wrote: “A film very close to my heart, feels like yesterday… Honoured to work with this wonderful set of people.”

Chennai Express, directed by Rohit Shetty, is a romantic action comedy set in Tamil Nadu. In the film Shah Rukh Khan stars as an easy-going man from Mumbai, who meets the runaway Deepika on a train and they embark on a journey of love and what follows is a comedy of errors. The film emerged as a hit at the box office.