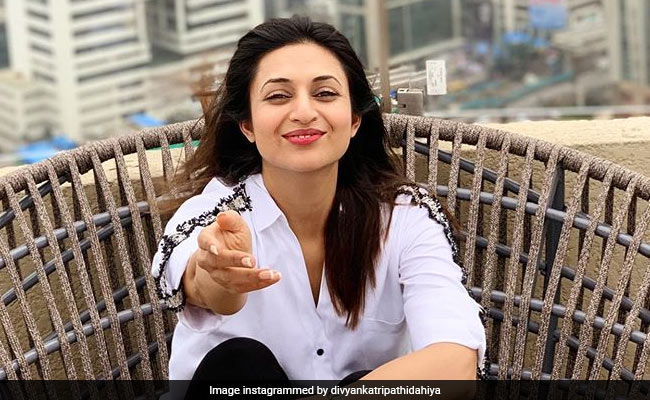 TV star Divyanka Tripathi has been trending for some of her adorable posts about her husband husband, actor Vivek Dahiya. The Yeh Hai Mohabbatein actress often features in headlines for her social media PDA with Vivek Dahiya and this story is about one such exchange. On Wednesday, Vivek Dahiya Instagrammed an ROFL fitness post, posing as a superhero, and writing: “Raise the bar. Unleash the power within… however little or big it is.” He begins the video by saying that we should challenge ourselves to perform better while working out and just when we thought he’s going to set an example, he flew off (GFX much?) into the sky (much like Superman) and returned in just 12 counts. He said his previous count of taking a round of Andheri was 15 and he just broke his previous record. LOL.

Take a look at Vivek Dahiya’s post before we show you Divyanka’s response:

Very impressed by her husband’s superhero persona and his shenanigans on the terrace, Divyanka borrowed lyrics from Take Me For A Ride by Holy Oysters and wrote: “So would you take me for a ride? Take me by your side, take me with you…. Reaction to Mr Vivek Dahiya’s last post. Take me for a ride. (For real! Not like the idiom). LOL.

Earlier, Divyanka was photobombed by Vivek for a pretty cool click, which prompted her to write: “Always keep one eye at the back… without being an owl of course!”

On a serious note, this is how intense Vivek Dahiya’s work-out sessions look like: