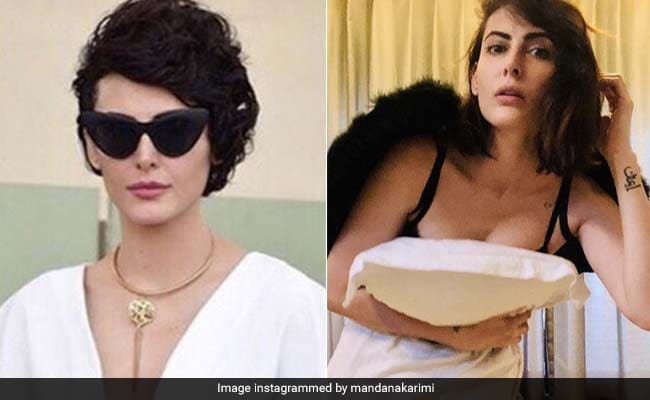 Actress-model Mandana Karimi gave us a glimpse of her look from her pre-quarantine and her stay-at-home diaries and it is just too relatable. Mandana shared two pictures of herself – in one of the pictures, Mandana can be seen dressed in a white top and sunglasses, while in another shot, Mandana can be seen holding a white pillow while posing for the camera. Sharing the then vs now picture, Mandana wrote, “Girls never stop playing dress-up. Correct, but I used to dress up like this (picture number 1) and quarantine happened (picture number 2).” She also revealed in her post, that in quarantine, she has nowhere to go. “Left with no place to go,” wrote Mandana Karimi. Take a look:

Mandana Karimi is keeping her Instafam amused with pictures and videos featuring herself. On Wednesday, Mandana Karimi shared a video of herself where she can be seen running on a treadmill in the gym. Sharing the video, which seems to be a throwback, Mandana revealed that she runs now to distance herself from the refrigerator. “Before I used to run on a treadmill (to get fit). But now I run from my refrigerator calling my name every 10 minutes.”

Mandana Karimi recently trended a great deal with her video featuring herself dressed as Joaquin Phoenix of the 2019 film Joker.

Earlier, Mandana Karimi trended a lot for her video where she clarified that she doesn’t have coronavirus, but was suffering from an eye infection. “Thank you so much guys for all the concerned messages. I’m okay, I’m fine. I just have an eye infection, which has caused me this bruise,” she said.

Mandana Karimi, who has starred in several advertisements, made her Bollywood debut with the 2015 thriller Bhaag Johnny. She has also featured in films such as Roy, Main Aur Charles and Kyaa Kool Hain Hum 3. Mandana participated in the TV reality show Bigg Boss 9 in 2015 and became the second runner-up.