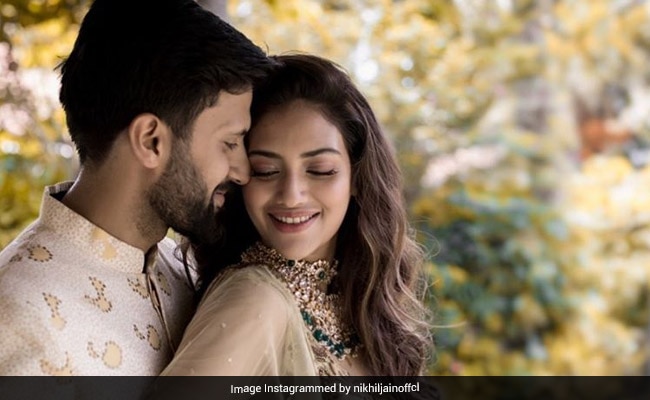 Actress-politician Nusrat Jahan’s wedding anniversary celebrations with husband Nikhil Jain spilled onto Instagram, reminding us of their dreamy wedding in Turkey’s Bodrum last year. Nusrat, who had two wedding ceremonies on June 19 last year, shared a throwback studded montage, with memories from her wedding album. Sharing loved-up photos in separate posts, Nusrat wished Nikhil Jain with a mushy note: “You are my today and all of my tomorrow, I will always love you with all my heart coz real love stories never have endings! Happy anniversary, love.” Nushrat and Nikhil’s wedding anniversary special video also has glimpses of Nushrat’s oath-taking ceremony as a member of the Lok Sabha just days after her wedding. Bengali actress Mimi Chakraborty, who too became a member of the Lok Sabha that time, shared an adorable anniversary greeting for the love birds in the video.

“Celebrating us,” Nusrat wrote while sharing this:

Meanwhile, Nikhil Jain made their wedding anniversary all the more special with these anniversary post-cards on Instagram: “A year seems too less yet so eventful. Awaiting lifelong of events with you, for you, by you! Happy love anniversary!” Because one anniversary post was not enough, Nikhil also wrote this beautiful note: Your smile makes me tick. Forgive me, I can’t take you any other way. Your smile means the world to me!”

Nusrat Jahan is best known for her roles in Bengali films such as Zulfiqar, Har Har Byomkesh, Ami Je Ke Tomar, Asur and Kelor Kirti. Last year, then just-married Nusrat Jahan was criticised for wearing sindoor and choodha to the parliament after which she said in a statement: “I represent an inclusive India which is beyond the barriers of caste, creed and religion.”