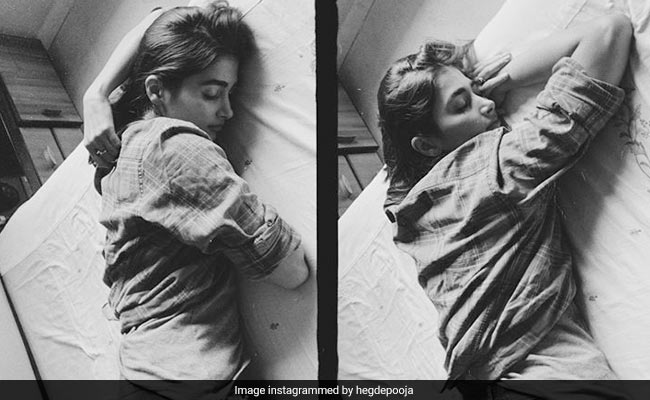 Pooja Hegde’s latest post on Instagram sums up her “entire quarantine life” (her words, not ours). The actress, on Monday, shared with her fans how she has been spending her time in quarantine with the help of two pictures of herself. Pooja Instagrammed a picture collage featuring her sleeping like a baby on what appears to be her bed. Sharing the collage, Pooja wrote: “My entire quarantine in a nutshell” and accompanied her post with the hashtag #quarantinelife. Within minutes of sharing the picture, Pooja’s fans started dropping heart emoticons in the comments section. Here’s the post we are talking about:

Meanwhile, also check out Pooja’s other posts from her quarantine diaries:

We are elated to welcome back @hegdepooja to the #NGEFamily, as she joins #SajidNadiadwala‘s “Kabhi Eid Kabhi Diwali” starring @BeingSalmanKhan directed by @farhad_samji@WardaNadiadwala@SKFilmsOfficialpic.twitter.com/yIHT5Inof3

The actress, talking about working with Salman Khan in the film, earlier said in an interview with mid-day: “One has to up their game when working with Salman. He has been working for years, so I am nervous.” In the same interview, Pooja also described the script of Kabhi Eid Kabhi Diwali “cool and funny.”

Pooja Hegde made her acting debut with a 2012 Tamil film Mugamoodi. She later joined Bollywood with Ashutosh Gowariker’s Mohenjo Daro, in which she co-starred with Hrithik Roshan. She has also worked in films such as Duvvada Jagannadham, Housefull 4, Saakshyam, Maharshi and Ala Vaikunthapurramuloo, in which she starred alongside Allu Arjun.