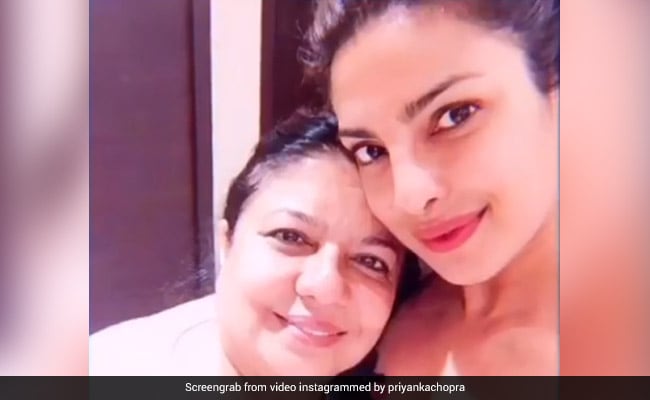 Happy birthday, Madhu Chopra! Celebrating her mother’s 62nd birthday, Priyanka Chopra shared a video collage featuring snippets of their mother-daughter time. Priyanka also accompanied the video with a warm birthday note for Madhu Chopra. In the video collage, Priyanka can be seen posing with her mom in front of the Eiffel Tower, while in another shot, they can be seen posing for a selfie together. Sharing the video, Priyanka wrote, “My backbone, my strength, my 3 am call, my inspiration, my best friend, my mother, my everything. Happy birthday, mom.” Priyanka, who is currently in Los Angeles, cannot stop missing her mother. She added, “I miss you so much right now and am missing our ritual of spending the day together. I will see you soon. Love you loads, Madhu Chopra.” See her post here:

Within minutes, Priyanka’s post was filled with comments and birthday wishes from her friends and fans. Reacting to the video, Anupam Kher wrote, “happy birthday to your mom,” while designer Manish Malhotra commented “happy birthday, Madhu Chopra,” and added a heart emoticon.

Priyanka Chopra keeps sharing pictures of her parents on her Instagram profile. On memorial day, Priyanka shared a throwback picture of her mother and her late father Ashok Chopra. “Both my parents served in the Indian army… and maybe that’s why I feel such a kinship with military families all over the world. Today, let’s think of all the fallen heroes that have given their lives in service to protect our freedom,” wrote Priyanka.

On Mother’s Day, Priyanka Chopra wrote an emotional note for mom Madhu Chopra, her mother-in-law Denis Jonas and for all the “mother figures in her life.” Take a look:

Priyanka Chopra was last seen in the film The Sky Is Pink where she shared screen space with Farhan Akhtar and Zaira Wasim. She will next be seen in Netflix’s adaptation of The White Tiger. She also has the superhero film We Can Be Heroes, The Sangeet Project with Amazon Prime and a film with comedian Mindy Kaling.