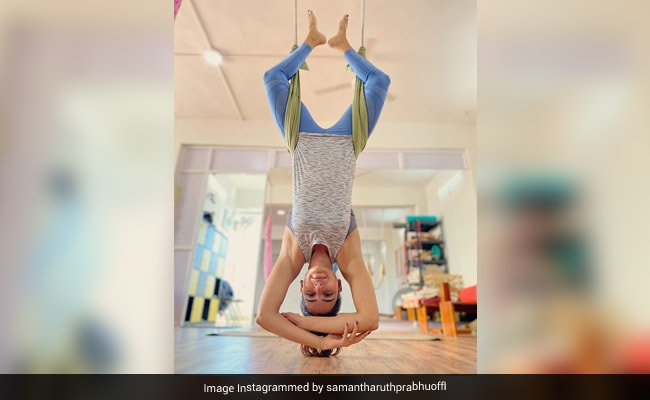 Samantha Ruth Prabhu, who has been delighting her fans by actively posing pictures from her yoga routines on Instagram, did it once again. On Wednesday, the 33-year-old actress shared a picture, in which she can be seen doing aerial yoga. Going by the expression on her face, seems like Samantha pulled off the pose with utmost ease. The Oh! Baby actress had a smile on her face and she accompanied the picture with one helluva caption. She wrote: “Congratulations! You and I made it to July.”

A few days ago, the actress shared a few photographs, in which she could be seen sitting on a yoga mat along with her dog Hash. She captioned the post: “Today, I begin my 48 days of the isha kriya journey. I invite you to join me. Isha kriya brings health, prosperity and well-being. It is a powerful tool to cope and is meant to empower us to live life to our fullest potential. It is a free guided meditation. I wish you peace.”

Samantha Ruth Prabhu is best-known for her performances in films such as Ye Maaya Chesave, Rangasthalam, Neethaane En Ponvasantham, Yeto Vellipoyindhi Manasu, Seethamma Vakitlo Sirimalle Chettu and others. She had several releases last year, which included the Telugu film Majili (in which she co-starred with her husband Naga Chaitanya), Jaanu and Oh! Baby. She will next be seen in the Tamil film Kaathuvaakula Rendu Kaadhal.

Samantha Ruth Prabhu and Naga Chaitanya, co-stars of films like Manam, Ye Maaya Chesave and Autonagar Surya, got married in 2017. The couple had two weddings – one in accordance with South India rituals preceded by a Christian wedding.