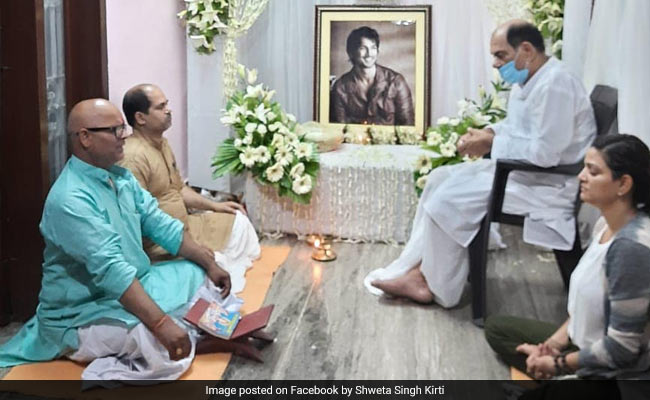 Sushant Singh Rajput’s sister Shweta Singh Kirti shared a picture on her Facebook page, which shows how the family gave a “final send-off” to the late actor with “love and positivity” at their home in Patna. Shweta Singh Kirti shared a picture from what appears to be a small prayer meet held at Mr Rajput’s home and she captioned it, “A final love and positivity filled send-off to my little brother. Hope you always stay happy wherever you are… We will always love you for eternity. #Sushantsinghrajput.” In the photo, Sushant Singh Rajput’s father KK Singh can be seen seated close to his son’s picture, placed on a flower-decorated podium.

Sushant Singh Rajput was found dead at his Mumbai apartment in June 14. The police say he died by suicide; an investigation is underway. Over the weekend, Sushant Singh Rajput’s family also issued a statement announcing that they will soon set up a foundation in his name – Sushant Singh Rajput Foundation (SSRF) – to support aspiring talents in the fields of cinema, sports and science. They also said that actor’s childhood home in Patna will be converted into a memorial, which will have his personal belongings and his “most prized possession” – his telescope.

Filmmaker Mukesh Chhabra announced that Dil Bechara, which Sushant Singh Rajput filmed before the lockdown following the COVID-19 pandemic, will release on Disney+Hotstar on July 24.