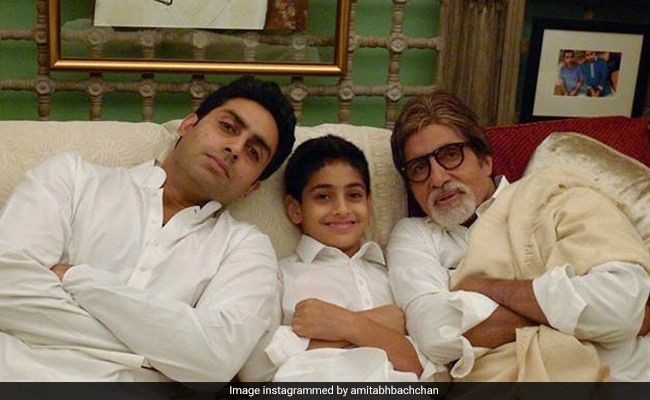 Amitabh Bachchan, on Sunday, shared a throwback picture featuring son Abhishek Bachchan and grandson Agastya Nanda and it has our heart. In the picture, Big B, Abhishek and Agastya, dressed in white kurtas, can be seen sitting on a couch. “Father, son, grandson.. some years ago,” wrote Amitabh Bachchan. Referring to their same pose of folding their hands as they smile for the camera, Big B added, “The folded hands are unplanned .. just happened.” Agastya, 19, is Big B and Jaya Bachchan’s grandson from Shweta Bachchan Nanda and Nikhil Nanda. Take a look at Amitabh Bachchan’s throwback picture featuring Abhishek and Agastya here:

Big B keeps sharing adorable pictures featuring his family on his Instagram profile. A few days back, Big B trended a great deal with his picture featuring grandson Agastya Nanda. In the picture, Big B and Agastya can be seen carrying dumbbells as they pose with a gym set-up in the background. “Fight the fit.. fit the fight.” Big B wrote, “Fight.. fight the fit.. fit the fight.. reflective mirrors, laterally inverted imagery.. and the inspiration with grandson,” wrote Big B.

Earlier this year, Big B shared a picture collage of himself and Abhishek Bachchan wearing identical outfits. “When the son starts wearing your shoes and clothes, he becomes your friend! How ya doin’ buddy,” wrote Big B.

Here’s another picture of Amitabh Bachchan and Abhishek Bachchan sitting on the “same number of chairs.”

Amitabh Bachchan was last seen in Gulabo Sitabo co-starring Ayushmann Khurrana. Big B has Chehre, Jhund and Brahmastra to look forward to. On the other hand, Abhishek Bachchan was last seen in Manmarziyaan where he shared screen space with Taapsee Pannu and Vicky Kaushal. He has an impressive line-up of films for this year. He has films such as Ludo, The Big Bull and Bob Biswas to look forward to.